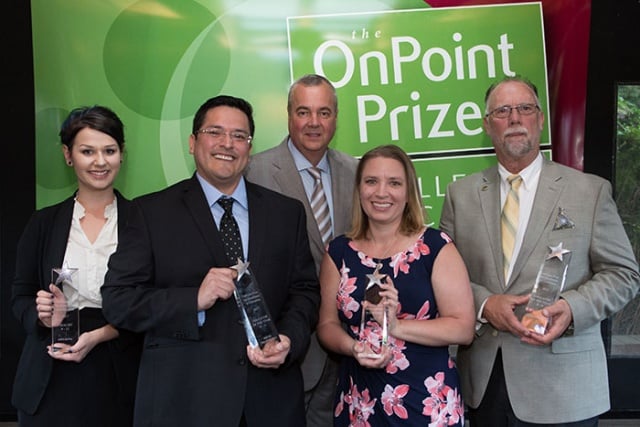 PORTLAND, Ore., June 1, 2017—OnPoint Community Credit Union recently announced that James Nosen was named K–8 Educator of the Year and David Valenzuela was named 9–12 Educator of the Year. The top prize pays each teacher’s mortgage for one school year and awards a $2,500 donation to their schools for resources and supplies.

The annual OnPoint Prize for Excellence in Education recognizes exceptional teachers throughout Oregon and southwest Washington for their ability to encourage creativity, inspire enthusiasm for learning, and positively impact their students. Since 2010, nearly 1,000 teachers have been nominated by their peers, students, and parents. At the conclusion of its eighth year, OnPoint has honored over 60 teachers with prizes reaching over $200,000.


Nosen stood out for his ability to engage students, encouraging school-wide participation in the arts and facilitating a visit from Arun Gandhi for the dedication of the student-created portrait of Gandhi’s grandfather, Mahatma Gandhi. Over 25 years, Nosen took more than 1,000 students and family members on trips to 36 different countries, raising funds to make travel available to any child who wanted to attend. Nosen will receive his mortgage paid for one school year by OnPoint Community Credit Union, plus $2,500 for his school to be used for resources and supplies.

Valenzuela has impacted his school community through his work as Chair of the Madison High School Science Department, as well as an advisor to the Hispanic Club, American Red Cross Club and Health Occupation Students of America. Under his direction, Madison has won grants and forged research facility partnerships, offering students hands-on experience as part of their coursework. Valenzuela will receive his mortgage paid for one school year by OnPoint Community Credit Union, plus $2,500 for his school to be used for resources and supplies.

“As a credit union founded by teachers nearly 85 years ago, OnPoint has always understood that inspiring educators make a tremendous difference in the lives of students and in the communities where we live,” said OnPoint Community Credit Union’s President and CEO, Rob Stuart. “The OnPoint Prize for Excellence in Education is our opportunity to recognize the creativity and dedication of teachers who impact in our lives.”

The following 2017 finalists will each receive $2,500 for themselves and $1,000 for their schools for resources and supplies:

In addition to the Educator of the Year Award, OnPoint also honored four schools with the Community Builder Award. The $1,000 award provides funding for schools to complete a project that is enriching to the school, students and faculty.

More information about the OnPoint Prize for Excellence in Education can be found at www.onpointprize.com.

OnPoint Community Credit Union is the largest credit union in Oregon, serving more than 323,000 members and with assets of $4.8 billion. Founded in 1932, OnPoint Community Credit Union’s membership is available to anyone who lives or works in one of 13 Oregon (Benton, Clackamas, Columbia, Crook, Deschutes, Jefferson, Lane, Linn, Marion, Multnomah, Polk, Washington and Yamhill) and two Washington counties (Skamania and Clark) and their immediate family members. More information is available at www.onpointcu.com or 503-228-7077 or 800-527-3932.