Since 1865, June 19th has held special meaning: It’s the day that the last of enslaved African Americans heard about their freedom. Black communities across the U.S. have honored the occasion at festivals, church services, picnics and gatherings for more than 150 years. This summer, Juneteenth, also known as “Independence Day”, “Freedom Day” and “Jubilee Day” was finally recognized as a federal holiday.

It’s essential to understand the history and cultural significance behind this day. Juneteenth was introduced to Oregon by community leader Clara Peoples in 1945. Today, Peoples’ organization—Juneteenth OR—celebrates the message and significance of Juneteenth both on June 19th and year-round.

The history of Juneteenth

Juneteenth commemorates the emancipation of Black Americans from enslavement on June 19, 1865. Many point to the signing of the Emancipation Proclamation on January 1, 1863, as the “official” end of slavery, but, in reality, many Southern states still held enslaved peoples.

Slavery wasn’t illegal until Congress passed the 13th Amendment in early 1865. Even then, those who were enslaved were emancipated only in areas where the Union Army was in control—leaving hundreds of thousands of Black Americans enslaved in Confederate states.

“The people of Texas are informed that, in accordance with a proclamation from the Executive of the United States, all slaves are free. This involves an absolute equality of personal rights and rights of property between former masters and slaves, and the connection heretofore existing between them becomes that between employer and hired labor.”

Finally, the last enslaved population—more than 250,000 people—were told that they were free. The day of the announcement became known as Juneteenth.

How is Juneteenth celebrated?

Early Juneteenth celebrations were marked by resistance as Jim Crow laws kept Black people from gathering in public venues, such as parks. Instead, many held festivities in churches, gathered in rural areas for picnics, or met in homes for barbecues. Over the years, as more Black people could purchase land, Juneteenth celebrations became more public.

Today, people across the country celebrate Juneteenth both as a time of celebration and reflection. On June 17, 2021, President Joe Biden signed into law June 19th as a federal holiday. Juneteenth National Independence Day is the first federal holiday adopted since Martin Luther King, Jr. Day was recognized almost 40 years ago.

In Portland, much of the Juneteenth celebration efforts have been driven and supported by Juneteenth OR through programs that uplift the community year-round.

The history of Juneteenth OR stretches back more than 75 years to 1945, when Clara Peoples was working in the Kaiser shipyards. She’d just moved to Portland from Oklahoma, part of a wave of African Americans who relocated to the Pacific Northwest during the Great Migration. When June 19th rolled around, Peoples was surprised to find that almost no one in her new community knew about Juneteenth; back in Oklahoma, it was a day filled with festivities.

Peoples asked her supervisor if she could announce this special day to her coworkers during break time. Over the loudspeaker, Peoples announced: “Hear ye, hear ye. It’s Juneteenth. We have 15 minutes to celebrate.” Peoples and her co-workers’ celebration is the first known Juneteenth in Oregon.

Over the next few decades, Peoples continued to organize annual Juneteenth events in Northeast Portland. In 1972, Peoples made it official and founded Juneteenth OR.

Juneteenth OR is born

Thanks to Peoples’ organizing, the awareness of Juneteenth grew in our region. Initially held in Holladay Park and the Bethel AME Church, the family-friendly festivities included parades, clowns, live music, a carnival, and lots of food.

At the time of Juneteenth OR’s founding, many Oregonians didn’t know much about Juneteenth’s cultural significance, history and traditions. The organization’s efforts have changed that, helping to bring Juneteenth and other issues into the spotlight in the Portland community.

Clara Peoples led and grew Juneteenth OR until 2011. At that time, the Rev. Dr. Ronald “Doc” Myers, founder of the National Juneteenth Observance Foundation, drove a national campaign to make Juneteenth a national holiday. He honored Peoples’ dedication and hard work by naming her the “Mother of Juneteenth.”

“My grandmother was named the Mother of Juneteenth in 2011. In 2015, I promised my grandmother a few hours before she passed that I would continue her legacy and make sure Juneteenth is celebrated annually like she would have wanted it.” Said Jenelle Jack, Director at Juneteenth OR, “I stepped in as the Director the year after she passed to keep her dream alive.”

After Peoples passed, Jack has continued the annual celebration of Juneteenth—filled with live music, art, entertainment, food, and education—and furthered Peoples’ goals of gaining recognition of Juneteenth as a federal and state holiday.

In 2021, Peoples’ dream came true with the passage of Juneteenth National Independence Day. And in Oregon, state lawmakers passed a bill that designates Juneteenth a state holiday, starting in 2022.

Since its founding in 1972, Juneteenth OR has achieved many of its founder’s original goals and developed programs that benefit the community. The annual Juneteenth Oregon Celebration brings Portland together on June 19. This community-powered festival draws thousands of visitors and includes live musical performances, parades, activities and entertainment for kids, delicious foods, vendor tents, and the Miss Juneteenth Oregon program. 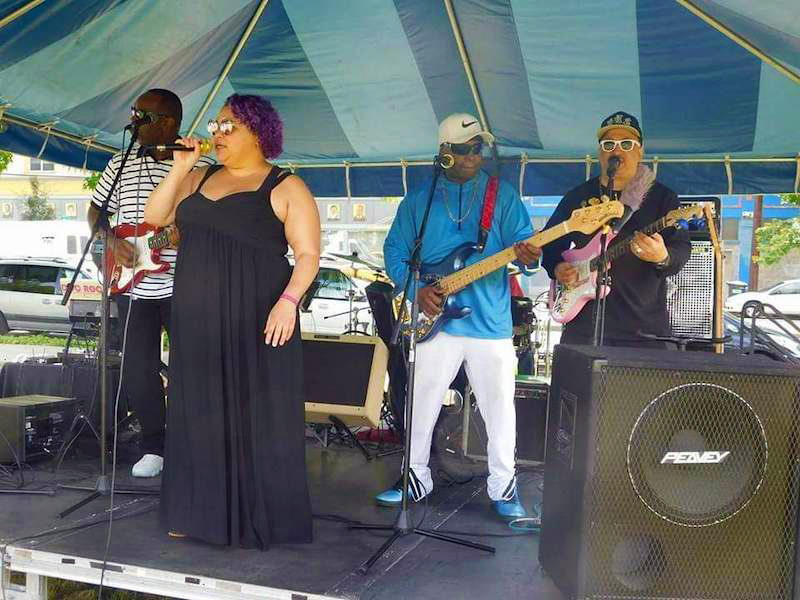 Juneteenth is more than just a one-day festival; the organization works year-round to educate and increase awareness of the meaning and history behind Juneteenth. The popular Miss Juneteenth program offers a range of opportunities for young women, providing education, tools, and resources to empower Black and Brown youth in Oregon and SW Washington.

A series of workshops, field trips, and mentorship opportunities throughout the year help participants build resilience, boost confidence, and make positive life choices. The Miss Juneteenth leadership development program further helps youth develop skills, practice leadership, and give back to the community through volunteer service opportunities, such as a food box collection and distribution program. During the Thanksgiving and Christmas holiday seasons, the organization gathers and donates food to support those who need extra help.

Each year, Miss Juneteenth winners receive scholarships and participate in parades. The 2021 winner of Miss Juneteenth Oregon, Aceia Spade, has been part of the program for three years and represented Oregon at the national Miss Juneteenth competition.

How You Can Get Involved

If you’d like to get involved and support the vital work that Juneteenth OR does, you’ve got plenty of options, starting with the annual Juneteenth Oregon celebration. Support this event by being a sponsor, a vendor, or a volunteer. Volunteer opportunities may include working in the information booth or the kids’ area, or helping with merchandise, set up and clean up, and more.

You may also apply to join the Clara Peoples Freedom Parade that marches down Martin Luther King Jr. Boulevard to the festival site, or participate in the Miss Juneteenth program. You can make a monetary donation or give to the seasonal food drive. This year, OnPoint made a $5,000 donation to Juneteenth OR for its event and educational programs. We also know that it is important to honor the importance of Juneteenth year round—we do so by providing ongoing education to our employees and by supporting organizations that serve the Black community. Learn more about how supporting Juneteenth OR helps raise awareness about the organization and its impact on our community.

Show your support for Juneteenth OR.

Much of the Juneteenth celebration efforts have been driven and supported by Juneteenth OR in Portland and surrounding areas. However, Juneteenth is more than just a one-day festival; the organization works to educate and increase awareness of the meaning and history behind Juneteenth through programs that uplift the community year-round. If you’d like to get involved and support the vital work that Juneteenth OR does, you’ve got plenty of options.

Learn More About How to Get Involved